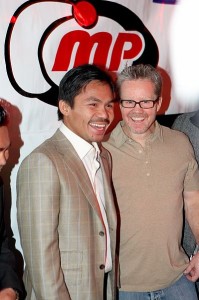 One word to describe an event for today – SHOCKING.

Well, I’m not alone. We are actually millions. Millions of Filipinos and people from other countries are SHOCKED. One of our greatest warriors in boxing ring has been, well, defeated. What’s shocking about it, you say? Coz it’s the first time I’ve seen him that DOWN, literally.

So, who’s this boxing warrior I’m talking about? It’s Manny “Pacman” Pacquiao. Today is the Pacman vs Marquez, a much awaited boxing fight of the year, and the fourth face-off of the boxing rivals. As a fan and a supporter of Pacman, I really didn’t expect that fight to end like that. That was a quick turn of events…

Who is Manny Pacquio?
Who is Juan Manuel Marquez?

It’s Sunday. It’s an ordinary day for us, for my family, for me. But this is also a big day for Manny Pacquio and Juan Manuel Marquez for this is the day to determine who’s stronger and who the real champion is.

In ordinary day, my father used to go to farm early and just go back home to eat lunch. This time, it’s different. Just like when Pacman has a fight, he went home early today to watch the boxing fight, so as the rest of the family – that includes me. But I can’t watch the whole boxing match unforuntaely. I’ve got to earn those bucks. So I started working.

But as soon as the fight started, I can’t focus anymore. We are so eager to know who won. Since we are only watching from local television (I can’t afford pay-per-view), I just looked for live updates from twitter and facebook. I got so excited reading those feeds on how Pacman did well on the first few rounds. Round 6 was the turning point. I read on twitter “Pacman falls to Marquez”. I was like “HA????” “Ansave?”. At first I didn’t believe it, so I browse for more updates. Sadly it’s true. Pacman lost the fight. What shocked me is how he was defeated – a total knock out!

Despite of what happened and the result, I am still a fan and will always be. I’m proud to be your supporter. I and my family still love you Manny!