Mehndi Ceremony became such an integral part of the wedding ceremony that we can’t imagine without it. It is meant for adorning magnificent intricate Mehndi Designs for Feet and Hands of a bride by mehndi expert in their family or professional mehndi artists.

Furthermore, Mehndi is one of the Solah Shringaar (sixteen adornments) of bride defined in Indian Hindu rituals. Considered her beauty is incomplete without adorning her hands and feet with Mehndi. This ritual is not only part of Hindu weddings in India but also a part of wedding rituals among Indian Muslims.

Mehndi or henna is the art of applying the paste of an indigenous herb in elaborates designs on the hands and feet of the bride which imparts a deep red colour. The richness of the colour in Mehndi has immense significance in our Indian culture. It symbolizes luck, prosperity, and fertility of the bride.

Every bride wants to adorn her body with exceptional and excellent Mehndi designs on her big day. It’s not just covering up hands and legs with any designs. Indeed, some brides lean towards coordinating hand and legs mehndi designs.

So, here are some of the most beautiful designs of mehndi which you can apply on your legs or feet.

This basic traditional Mehndi design looks simple but it looks beautiful with heavy anklets. Brides who prefer to adorn with leaf mehndi can opt for this design which lost for months.

This is a simple mehndi design who can apply at home. This simple model is mostly preferred for bridesmaids or small occasions at home such as birthday parties, baby shower and etc.

Basically, these Arabic designs are composite of mango and floral motifs in vertically with some intricate of leaves. The surrounding space left in between the design gives the beauty to the design.

A new trend of mehndi design which combines the style of lace and traditional beauty of Mehndi is “Lace Mehndi Design“. This Mehndi design just looks like a lace wrapped around your feet.

Once you remove the mehndi, it just gives an illusion of a red netted lace wrapped on your feet.  These fusion mehndi designs are mostly preferred by modern brides for their sensuous look.

These anklet mehndi designs also look catchy for the brides, for those toe ring ceremony is not mandatory. This design looks great with simple anklets studded with stones or polka stones that shines most with the red mehndi feet.

Phair phool mehndi designs are the most stylish henna designs for brides who are not willing to wear heavy designs. Why not decorate your feet too with a feet harness mehndi design similar to the hath phool? This works best if you have a simple anklet design on your feet.

Peacocks have mostly used patterns in Indian mehndi designs. This intricate with thick and thin shades of mehndi brings out the best of the effort.

Peacocks with elaborated feathers in combination with flower motifs like a rose, a lotus within creative intricate designs are definitely an eye feast. Undoubtedly, these stunning peacock heavy henna designs are most ideal for brides.

The bride and Groom Mehndi Design for Legs 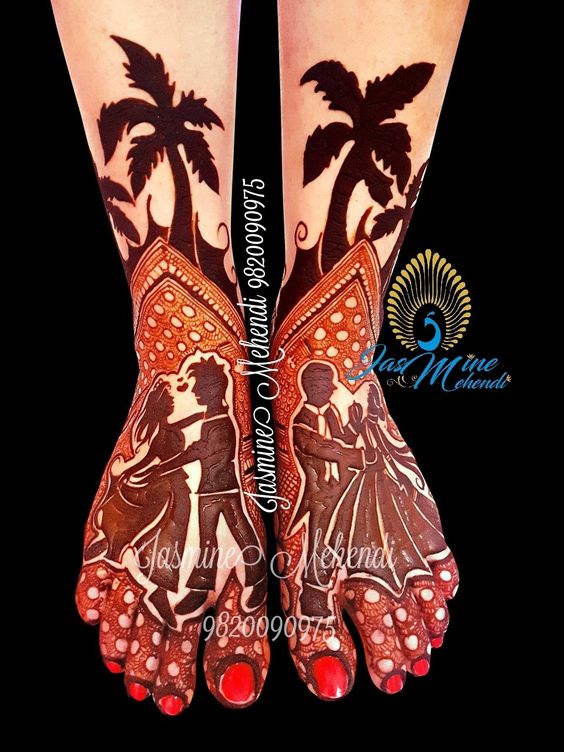 These patterns to extend to even feet with beautiful portraits or caricatures of bride and groom sketches. These complex designs demand the experts in the mehndi art.

Mehndi on palms and feet is quite common.  Consequently, it got extended to the sole of the feet. Well, this latest trend is soon catching up. A beautiful design on the sole will make the feet stunning, graceful and modish. We are sure that you are convinced of the idea by looking at the designs above. You will love these and will get ready to show off your feet with a stunning henna design on your big occasion.

Roses are girl’s favourites. Girls like mehndi designs with rose motifs not just on their hands, but legs as well.  Adoring feet with a single rose and surrounded by leaves itself simply awesome or you can even go for heavy designs in combination with the checkered pattern or with Arabic designs.

Lotus has its own importance in our Indian culture. Mehndi designs incorporating lotus flower signify grace, sensuality, femininity, and purity. Either you can go for normal lotus pattern or popular reverse mehndi technique where the surrounding outlined space is being filled to highlight the motif.  Especially, this negative space mehndi designs work well with lotus motifs.

It is easy to feature several geometric shapes in mehndi designs to build beautiful patterns.  Geometric shapes such as lines, curves, angles, and circles are arranged in a distinctive way to come up with a unique design. These henna patterns are easy to apply and best option of beginners.

Wow, look at this beautiful mehndi design which just resembles that small climber plants spreading over the feet. Moreover, the leaves and flowers in between the design give the natural look.

Look at this extraordinary mehndi design which is intricate of well-used box shapes from small size to bigger size to create a unique design.

If you are looking for a different style of foot mehndi then you can for this unconventional mehndi design. Unlike routine mehndi design, one side of your leg is decorated with a mehndi in a slanting pattern to make sure the alluring creates wonder.

What a beautiful design of an elephant adorned on the bride’s leg? Definitely an artistic mehndi design with a traditional touch.

Simple round Mehndi Design for Feet

In this Mandala styled Mehndi Design, Centre part of the feet is applied with mehndi with beautiful flowers or circular patterns and rest of the feet is left empty. These simple pattern coming for ages but looks awesome with a fair skin toned background. Suitable for all ages and occasions and easy to apply also.

Adding some sparkles to mehndi designs gives wow effect. What can make mehndi more alluring than colours and glitters?? Add glittering colours to mehndi designs so that they shine and reflects the lighting effect of photo lights. Though these glitters go off in few days, the shimmer on your wedding pics lasts for long. Look at the above image where red & gold glitter applied on feet below the mehndi design given even more beauty to the feet.

Some girls prefer to maintain the similar pattern mehndi designs between hands and feet. A simple design with the matching pattern on hands and legs looking gorgeous. What do you say?

Bangle mehndi designs are mehndi designs which have the design of bangle or bracelet around the hands. These are most popular bridal mehndi designs for their catchy look and fills the hands completely.  Likewise, the legs also adorned with spiral mehndi patterns becoming famous and fashion. 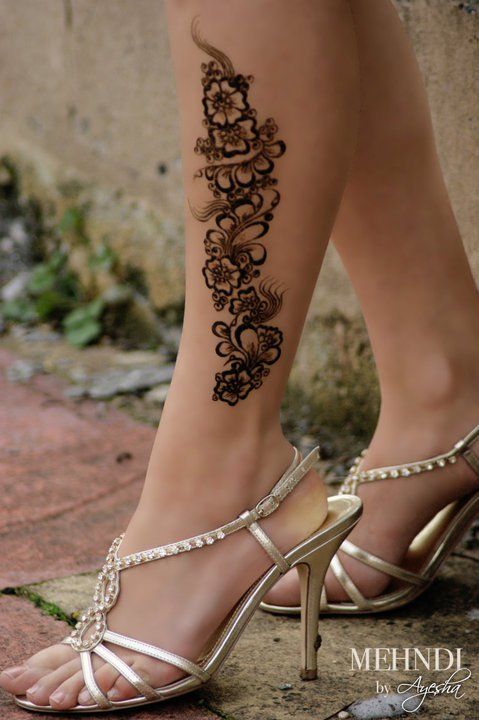 Due to fact that mehndi designs are adopted by other countries, these western tattoo designs became more popular. A small style or small design or unique design is applied on legs. These designs are mostly preferred by college going girls.

Floral mehndi designs never go wrong designs where ever you apply, be it a hand or leg. A simple bold floral design with leaf motifs looks classy and the floral design in a reverse filling technique with simple dots all over looks marvellous as well.

These garland mehndi designs are easy to apply on legs with connecting flowers with leaves and simple dots extensions.

The floral pattern is simple and still, the bold lines give it a contemporary beauty. The reddish hue of the mehndi makes it look ravishing with classy appeal.

Hennas are available in different colours as red, orange and black. These black mehndi is mostly used for motifs outlining and for shading appearance. Since black is considered as inauspicious colour in Hindu tradition, these black mehndi designs are mostly preferred in kitty parties or for a style statement.

Look at this heavy feet mehndi design which resembles the shoe pattern, but looks classy

Bird’s designs are always impressive. Having said that, Parrot motifs are the cutest that other birds no matter where ever you use in wedding ceremonies. Whether it could be stage backdrop in Mehndi ceremony or on bridal lehenga. Those parrot motifs are now extended to mehndi designs also. Look at these beautiful parrot mehndi designs on feet one with single parrot eating fruits pattern and the other one with multiple parrots flying and standing on the branches of a tree. Aren’t they adorable on feet?

Sometimes, the mehndi designs don’t need to be filled with matching and symmetrical patterns. The beauty can lie in the uniqueness of an asymmetric pattern with vine designs and floral patterns all over the legs. Neither the design on the fingers nor the design at the centre matching in the above mehndi design. Though both the patterns are different on each foot, the overall look is simply superb.

One more mismatch pattern of mehndi design where a few repeated symbols are used all over with finger pattern matching. Such designs give an opportunity for creativity and that worked well too.

These are some most popular and unique mehndi designs that you can apply on feet for brides, bridesmaids, guests, college students, and all age groups.  If you find this post useful, share with your friends and leave us your feedback in below comments section.