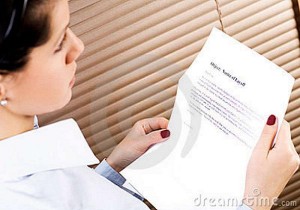 If you read carefully the terms and conditions laid out in the appointment letter issued by your employer, there would be a clause called ‘Termination’. This is the clause than can be used by the employer to severe the employment on various grounds like gross insubordination or for unethical practices. Termination can occur due to violation of company policies and gross misconduct. Companies can undertake mass termination drives during layoffs, lockouts etc.

In the regular usage ‘termination’ is referred to as ‘firing’ an employee. This does not mean that the letter should contain fierce language or should show off a threatening approach. There is no doubt that the termination letter would be issued as a corrective step to send out an undisciplined employee but the letter needs to maintain certain decorum and professionalism. There is a subtle difference between being strict and harsh and so the letter could be written in a strict language but should not amount to of being harsh.

Few samples have been provided in the below sections of the article and each sample addresses a particular situation that has led to the termination and how to present the reasons in a professional tone.

It is with sincere regret that I am intimating you that your services with XYZ Systems Inc. shall stand terminated as of August 31, 2013.

You are aware that the company has undertaken a massive reconstruction processes for reviving the company and make it strong to sustain the present global meltdown that has affected our industry very badly. As part of this drive, the taskforce team has identified several ways to reduce the expenditure and the removal of temporary staffs is one of them.

As you are a temporary employee with us, we do not have any other alternative but to terminate your services as per the recommendations made by the taskforce team. I wish to make it abundantly clear that the said termination has not arisen out of your non-performance. On the contrary, you have been the best worker amongst the temporary staffs and we acknowledge your valuable contributions made to the company.

I wish to inform you further that the company has worked out a severance package which contains certain severance benefits. You will be receiving all the details of this package from the Human Resources Department shortly.

Franklin, given your qualifications i.e. both educational and professional, I am confident that you will be getting a good job soon. If it would be any help to you in job search, I would be happy to write a recommendation letter for you.

This has reference to our discussions that we had with you on June 5 and July 15, 2013 and the subsequent guidelines give by us to you to improve the performance. You can also recall that the performance assessments done for the last 3 quarters were also discussed and we tried to seek the reasons for the poor performance exhibited by you.

We have also intimated to you vide our internal memo dated July 16, 2013 that though the reasons stipulated by you were not acceptable to us we have given one month time for you to improve your attitude and manners. But the assessment that we have done for the last 30 days has shown your callous attitude towards the guidelines and no concerted efforts of improvement from your end were found.

You are fully aware that it is mandatory for all the employees to attend the skill development programs conducted by the company but you have missed all of them since your employment. We are also in receipt of several complains from colleagues and peers about your temperament and approach. Several verbal and email warnings were issued to you to correct them but to in vain.

Now the management has taken a conscious decision of terminating your employment with immediate on the basis of gross insubordination, damaging the company’s reputation and violating the ethical and moral codes stipulated in our employee handbook.

This termination is with immediate effect and without any notice period as per the Clause 7.8 of the employment letter issued to you. You will be relieved from the duties by the closing hours of business on August 17, 2013.

You may please approach the Human Resources Department to collect the dues, if any and also to complete the necessary formalities.

This refers to your discussion with Ben Johnson, Human Resources Manager on August 16, 2013. During the meeting Ben has briefed you about your non-performance and your failure in improving the same.

You are aware that the company has given you ample time for you to improve upon the shortcomings that were observed during monthly performance evaluations. The same has been conveyed to you by your team leader and the Human Resources Department as well. You are also aware that the company has supported you by sponsoring you for various external training programs. Regrettably you have not taken the initiative from your end to capitalize the support and time period extended by the company.

As your non-performance is severely affecting the overall performance of the company we are left with no other option but to terminate your services. You will be given with 15 days notice period with effect from the date of this letter.

During this period you are requested to cooperate with the Human Resources Department for transition and other formalities.