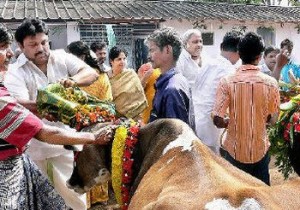 I had worked in Pondicherry  in 1988 to 1990.  That is the time I have had my first Pongal experience. As I was living in a village called Thavalakuppam  where agricultural was the main job.

On Thai pongal day the temples and house were busy for making kolam and praying. People where exchanging Pongal wishes  like” Pongal Vazhthakal” and “Pongalo Pongal” etc.

Next day when I got up, I heard lot of noise from the next ground where one of the large farmers bulls used rest. When I came out to see what is happening I have seen that bull are running all around and the workers were also running behind them with garlands . Obviously bulls did not like the idea of garlanding them by a human. Any way workers has got each one by one and They garlanded all of them. First I thought they are going to conduct some marriage of bulls. But there was no cows any where to be seen.

Then they have bought lot of cattle food and started feeding them. Looks like bulls were happy now, they were stopped their efforts to get rid of the garlands. May be they have thought if the garland bring us good food we can tolerate that garlands for some time.

After that the workers caught each bull and the owner of that farm came out with lot of red powder. He petted each bull with love and affection, put long red color powder on each bulls head. After this he has gone out and workers has come with more grass and cattle food for Cattle.

The whole event was so funny and Intersting. So I have asked my neighbor what is this. He told me that, that is called Mattu Pongal. Pongal for Cattle stock. They believe that like human these cattle also should have one day for festival and relax. That is the day mattu pongal. The owner and workers were thanking their cattle stock for working with them whole year in farming. So on mattupongal they thank and give them good food.

Whatever may be I think this is a good practice which will induce the Animal love in to the people who is seeing this and  especially to the farm workers Who is handling these poor animals daily. This will surely will reduce animal cruelty