Lord Krishna Had Fought With Arjuna :

Though most people believe that Lord Krishna was like a Friend , Philosopher and Guide to Arjuna during the Kurukshetra War , but many don’t know that they fought with each other. Lord Brahma came and had to stop the battle. It is said that a gandharva Gayan tricked Arjuna into helping him against Lord Krishna .

Lord Krishna was the father of 80 sons from his Eight Wives or AstaPatranis . Each wife had given birth to ten sons. pradyumna is one of the 80 Sons of Krishna though we do not know the other 79 sons quite well.

Subhadra was Lord Krishna’s sister and was to be married off against her wish to Duryodhana. Krishna’s father Vasudeva had chosen Duryodhana as a suitor for Subhadra . But Lord Krishna advised Arjuna to abduct her a. Since Subhadra held the reins of the Chariot , it was not an abduction . Though this act created a disagreement within balarama and Lord Krishna, but balarama was later on pacified and they were married off at Indraprastha.

Ashwatthama was the son of Guru Drona who was the teacher of Kouravas and Pandavas . He was blessed with a Jewel on his forehead, the ‘Mani’ which helped him overcome any situation and protected him. He had a lust for wealth and prosperity and wanted to become king. While Duryodhana died in the battle field , Ashwattama sneaked into the Pandavas camp in teh night. It is said that he used his most powerful weapon Brahmashira Ashtra to kill the unborn child in Uttara’s womb to stop the Pandava’s lineage. He, along with kripacharya and kritavarma killed all the sons of Pandavas . Krishna cursed Ashwattama for attempting to kill Uttara’s son by taking out the magical ‘Mani’ from his forehead and cursed him to roam around the earth without love and support from anyone till the end of Kaliyug.

Lord Krishna has eight wives who were known as the AstaPatranis . Though the queens all were devoted towards Lord Krishna , it is known that Rukmini was the most simple and whole heartedly devoted towards Lord Krishna. Rukmini was to be wedded to Sishupal who was known for his Evil works and nature. Rukmini requested Lord Krishna to intervene and abduct her , so that she will not have to marry Sishupal. Krishna came and eloped with her and later on Rukmini became wife and queen of Lord Krishna. It is believed that Rukmini is the avatar of the Goddess of Wealth Laxmi.

Lord Krishna Was Cursed by Durvasa:

Durvasa is one of the widely known Saints in Indian Mythology. It is believed that even Lord Krishna was not spared from his fury. One day when the Saint was eating Kheer which is a kind of Rice pudding and he ordered Lord Krishna to apply the left over kheer on his whole body. Krishna applied it all over his body but did not apply on his feet since it was believed that one must not show dishonor to food. But Durvasa was not happy with Lord Krishna disobeying his order and cursed him that since he had not applied Kheer on his feet , his feet would not be protected by his divinity and should be the reason for his death. It was later on seen that Lord Krishna died due to an arrow that struck on his toe.

Gandhari was a worshipper of Lord Vishnu and when the great war of Kurukshetra ended she cursed Lord Krishna for killing her sons. Since she was a Worshipper of Lord Vishnu, this curse was pre destined. Gandhari cursed that the Yadu clan will perish and will kill each other. She also cursed that Lord Krishna will die in solitude and his Kingdom will be wiped out due to flood. After 36 years of War , the Yadu clan killed each other and as per Gandhari’s curse Dwarka, Lord Krishna’s kingdom was destroyed by flood. Seeing the destruction ,Lord Krishna along with his brother Balarama left Dwarka . 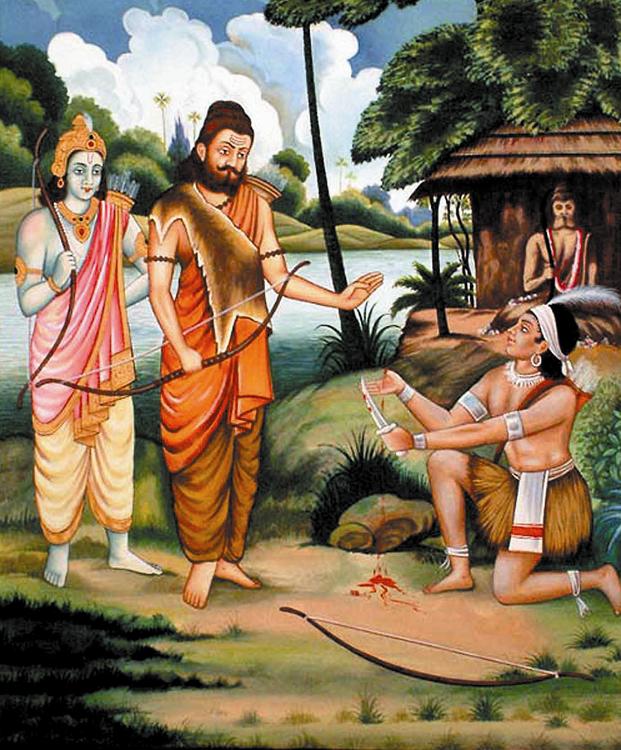 It is believed that Eklavya, the talented archer was the cousin of Lord Krishna. Eklavya was the son of Devsharava , brother of Vasudeva . Eklavya was lost inside the forest and was found by Hiranyadhanu . Eklavya had learnt his archery skills from seeing Dronacharya teach the kauravas and Pandavas . He paid the ultimate Gurudakshina by cutting his thumb as ordered by Dronacharya. Lord Krishna blessed him and he was reincarnated as Drishtadyumna who later on killed Dronacharya .

Radha appears in the text by Jayadev:

Radha, currently believed to be Lord Krishna’s lover was not mentioned in the oldest scripts of Ved Vyasa. It is believed that the character of Radha appeared in Jayadeva’s script and became popular afterwards.

Ajamila , who was brought up with traditions and teachings later on was sinful and abandoned his family, wife and children. He had children from his wife and from other women too, and at the moment of death Ajamila, being fearful started crying out his favorite child’s name : Narayana. Narayana , Lord Vishnu’s name or Lord Krishna’s when being chanted at the last moments called the Holy Vishu Dutas came and negotiated with the Yamdutas and later on agreed that even though Ajamila was a sinful man, all of his sins were forgiven as he had remembered the Lord Krishna’s name .

Krishna is in hell :

Though Krishna is Lord Vishnu reincarnated, but it is believed that he is in Hell. When Krishna’s mother Devaki wanted a child, Lord Krishna blessed her with a boy child. Once grown , the boy wanted to leave all worldly things an go on the path of sainthood. But later on the boy married a Brahmin girl to honor his mother’s wishes. The boy left his wife and all worldly ties a few days afterwards, making his Father in law angry . The angry father in law punished him by pouring Hot Coal on him and giving him a painful death. Lord Krishna punished the Father in law by using his Sudarshan Chakra to kill the Brahmin thus doing the sin of killing a Brahmin or ‘BrahmyaHatya’.

The Gopis when heard the sound of Krishna’s flute sneaked out of their homes and joined Lord Krishna at the Forest to dance with them all night. Lord Krishna danced with them and created the illusion that he was dancing with each one of them.

We hope these lesser known facts about Lord Krishna will help you know Lord Krishna better. Lord Krishna, till date remains the most mysterious character in Hindu Scriptures, but is quite ardently worshipped all throughout the country .