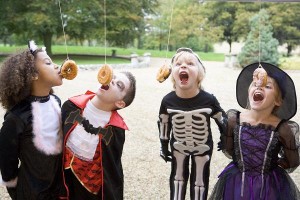 Halloween party games can be an icebreaker, a way to bring people together who do not know each other very well. The Halloween games and activities may encourage kids to talk and even become close friends. That’s why, if you are hosting a Halloween party, it is necessary to choose the games carefully so kids can have an exciting and enjoyable day.

Halloween party Games for kids vary from simple games like pass the oranges or peanut race to challenging games that have twists and turns. You can even use your creativity to introduce new rules just to make traditional games challenging and spookier. In case you are wondering about what games to play at your party, have a look at my Halloween game ideas, these games maybe modified to suit your guests’ preferences, age, and ability.

The following are 10 Halloween party games for kids that you can use to make your party a success. 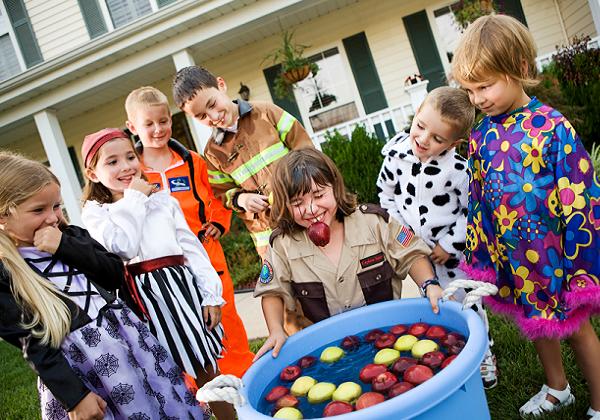 Bobbing For Apples is a traditional Halloween game, also the most popular. This game is easy to arrange, just fill a washtub with cold water, and then put the apples into the tub. Let the participants have a turn at getting apples with their mouth, and hands firmly behind backs.

Bobbing is a wet and messy game, extremely hilarious as people try to get as many apples possible from the washtub in their mouths. And the first person to get an apple marked with a special sign is the game winner. The special sign can be any of the Halloween symbol.

To make the game more challenging, chill the apple until it is time to play so people will have a hard time biting into it. And for group bobbing, get a larger tub wherein all the participants can dive at once and try to get an apple first or get as many apples as possible within the time allocated. Other variation of this game includes the use of soft plastic balls and mini boxes instead of apples and tub, safer and less messy.

2. Put the Wart on Witch

Are you familiar with a game called “Pin the tail on the Donkey” because if you are, “Put the Wart on Witch” is the same. The only difference is that, instead of the Donkey the character use is a witch since it is Halloween.  Children love to play this game, especially smaller kids as they find it funny to see the wart on the cheeks, ears and the other part of the face instead of the nose. 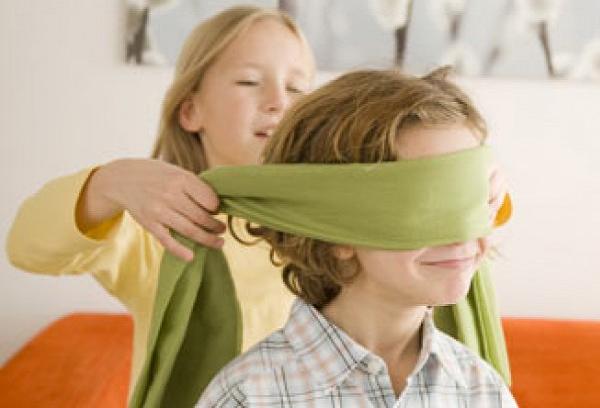 Snapping At Apples is another interesting game that children and adult can play on Halloween. This game is similar to Bobbing for Apples, but instead of retrieving apples from a tub filled with water, the players try to retrieve apples that are hanging from a ceiling or tree. Snapping At Apples will keep the players dry and safe as they don’t need to dive into a tub of water.

To play this game, you must hang apples from a tree or ceiling with the help of a twine or string. The guests playing the game must retrieve the apple with their mouth while their hands tied behind backs. In order to make Snapping At Apples challenging, hang the apples a bit higher or lower, so players will either jump or kneel trying to bite the apple without using their hands. 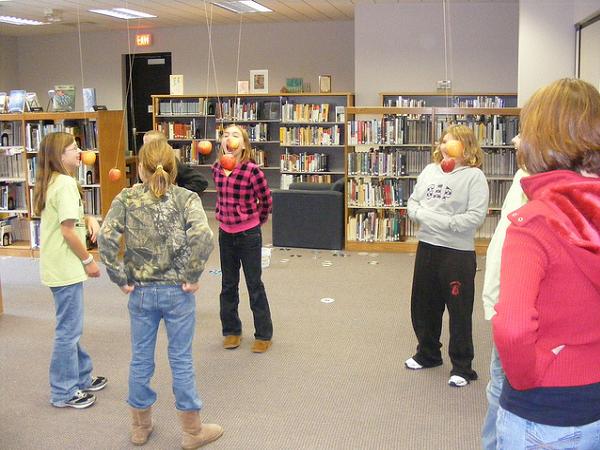 Pass the Oranges is a game adopted to suit the Halloween festival. It is a perfect game for small children, even work well in an adult party. With a bit of improvement in the game, adult can have fun playing this game.

To play this game, you need 10 players so you can divide them into two teams. Make the participants stand in a circle and have their hands behind their back. Next, place an orange under the chin of one player, and then she or he must pass the orange to the next player standing in line, neck to neck. Take note, they cannot use their hands while still playing the game even if the orange falls to the ground.

If in case the orange falls, the player who has made the mistake must bend down, lie down, or sit on the knee just to catch the orange under his or her chin. Only then can the player pass the orange to the next person standing in line. The first team to complete the circle, or get the orange back to the first person holding the orange under the chin, wins the game.

Keep in mind that this game is not easy to play as the participants must pass the oranges neck to neck and that require skill. Only those who will pass the orange deftly will win.

Twirl the Apple is a great game for women as the fortune telling game provides them insights on the facet of their relationship with the opposite sex and love. This game is fun and great for passing the time, and entertaining for most of the unmarried women who wish to know when they will marry and to whom.

With this game, you need apples with a long stem. The number of apples should correspond to the number of women participating in the game. Then, get a piece of string to tie to the apple’s stem. And ask the ladies who are participating to twirl their apple in the bonfire or fireplace. The first person whose apple breaks off and falls in the fire according to the game rule will be first one to marry while the person whose apple remains on the string last will become a spinster.

Word Scramble is a perfect indoor Halloween game. This game is great for both kids and adult especially for those who love testing their vocabulary. The good thing about this game is that you do not need a lot of space and any accessories, like other games played on Halloween.

For playing this game, give a word, usually Halloween related, and each player or team has to come up with many words possible from the letters of the given word. The person or team with the most number of correct words wins.

Blowing Candles is another interesting and popular fortune telling Halloween game. This game is extremely popular as a lot of people find the candles wonderful for enhancing the mood on Halloween more so when this game played during nighttime.  For this game, you need silk cloth, matchbox full of matches, a table, and three colored candles, preferably orange, green, and pink. The color determines the future of the game participants.

This game is easy to play but has to be played by one person at a time, so the other participants must wait for their turn. To play the game, light all the candles that you have placed on the table, keep them apart about a foot apart from one another. Next, blindfold the guest or the individual playing, turn them around the room, just enough to lose their sense of direction and get to the table where the burning candles are positioned. Then, let the player blow one candle.

Pink represent love, romance, and blowing it mean romance in the coming year will be good. Green candle symbolizes money and blowing the green candle mean, he or she will be getting some soon. Orange candle means going on a trip. This game still has a room for improvement. For example, adding more colored candles for the guests to blow, each with a meaning of their own.

Ghost Hunter is a game for the brave as players will need to hunt down ghosts on Halloween. The game allows players to hunt spooky creatures haunting the house like from the movie Ghostbuster. For playing this game, you need to create ghosts or hide toy ghosts around the house and let the kids loose, to hunt these ghosts down. The time table for this game depends on where you have hidden the toy ghosts and the age of the players. This game is best for tweens who love ghost hunting and ready for adventure.

By the way, hide the ghosts inside the house if small children are the ones playing this game. But if teenagers are the participants, you can hide ghosts in the backyard or the outdoors as long as there is an adult to supervise the game, especially when the hunt will lead to a nearby farm or fields. The ghosts can be a toy, lollipop, fake skeleton and a piece of cloth tied to create a ghosts shape. Additionally, you can also give clues to the players.

To begin the game, divide players into teams, so even if they play on a field they are not alone. Tell them the rules, and start the hunt. When they find the ghosts, let them keep it and the team who finds the most number of ghosts wins.

Mummy Wrap is a game created out of fascination with mummies, and the pharaohs of Egypt. The Mummy Wrap is a fun game, no wonder it is often played on Halloween parties. For this game, you need a lot of toilet paper as players will be wrapped on it.

This game is easy to play, just divide the participants into pairs, and give two rolls to each pair. Then, have the players wrap each other until they become a mummy. The first pair to finish wrapping each other wins. This is an easy game but tricky as players must wrap their partner quickly and must do it without wrapping their hands. 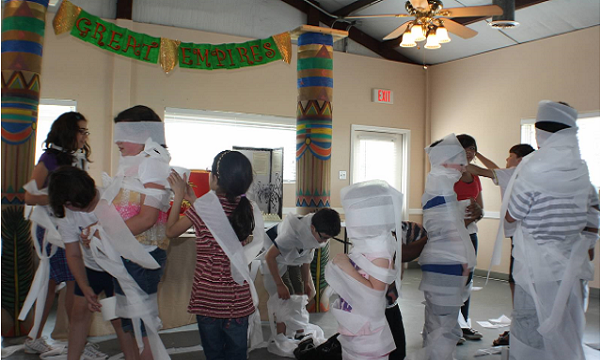 This is absolutely an exciting game for kids and can be played by an individual or a group, making it a perfect Halloween party game. Kids will love playing Treasure Hunt as the thrill and adventure of the game promises a great time. To set this game, you will need to come up with things to do for players looking for the lost treasure. And of course, find a good place to hide the treasure. The players should also be wearing Halloween costumes in keeping with the spirit of the festival.

There should also be clues that should be according to the age of the participants and well thought out to keep the game interesting until the end. To begin the game, divide the players into groups, an adult must head each team if small children are playing and the game outdoor. For teenagers, the older player is the leader and responsible for their group. The list of tasks must also be challenging. Below are good examples of tasks.

Get a photo of a police officer.

Listen to a song to find the next clue.

Visit a house and ask for a tomato soup.

Find the price of an egg in a store.

Find out the year the Halloween movie was released.

Shoot a video of someone dancing to the latest music.

The above tasks are just example to give you an idea. And because you are the one who set the theme or the rules then you can change the game rules to what you think is suitable for your guests. Just remember that treasure hunt game should be fun, entertaining, and safe to play as the whole idea of the game is to keep kids occupied on Halloween.

These are just some of the Halloween party game that you can organize on your next party. Bear in mind also that traditional games can be adapted, so do not be afraid to use party games played on birthday parties and get together as long as the game has a Halloween theme.