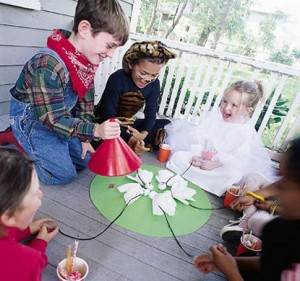 Who doesn’t want to play Halloween games on the scariest time of the year? Halloween was once a holiday meant for religious festivities. After all, it is the evening before All Saints Day. But as different countries carried out the holiday with different versions of the original traditions, Halloween eventually became a more enjoyable holiday with all kinds of entertaining activities. Now, Halloween is mostly associated with candies and costumes. Pumpkin carving and trick-or-treating aren’t the only activities you can do on Halloween though. It’s a great time to play the wackiest or scariest games especially at night when it’s dark and creepy outside.

With all that sugar and spooky décor around and the chance to wear and be whatever you want to be, playing Halloween games will be really exciting and will make things much more interesting. Games will also keep any tricksters preoccupied to even think of pulling off some mischief. You can play games that will keep you awake all night for the next week or games that will lighten the mood and rock the party. Halloween games are definitely a great way to spend the holiday.

A Halloween party may not be as fun when you don’t have any games at all. Now, if you are the organizer and you still have no idea what Halloween party games to execute to the party, here are some ideas that you may consider. 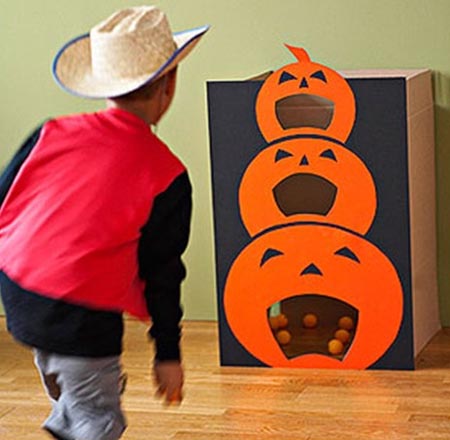 A simple and easy Halloween party game that’s fun for all ages. All you need is a couple of bean bags and a box (or any kind of container) painted with a Halloween motif like a jack-o-lantern or a ghost in a sheet or a witch’s cauldron. The rules are simple. The person who can shoot the most bags in the box wins. They have to throw the bean bags from a distance though. You can even choose to hang the box or container from a height to make the game more challenging.

This game is played in teams. The number of members will depend on the host. One member will have a Halloween-themed picture taped on his or her back. He or she has to guess what the picture is without asking any questions other than yes or no questions to his teammates. The group with the best time wins.

In this Halloween party game, you can use different Halloween entities including Scarecrow, Jack-o’ Lantern, etc – anything that does have a nose where the participants have to put back the nose while being blindfolded.

This is one of the most fun games for Halloween as there are many participants needed for this one. First, you have to have a pumpkin in a size of orange. Decorate it to make it even more suitable for the occasion. Group the participants into two teams with the same number of participants. Then, put the pumpkin to the first participant’s chin and let him pass it to the next member’s chin without using their hands. The first team to relay the pumpkins to the last member wins.

Dress up games are very common in Halloween parties. Now, all you need is the theme for the Halloween dress up games. Here are some of the ideas that will make the dress up galore even more fun. 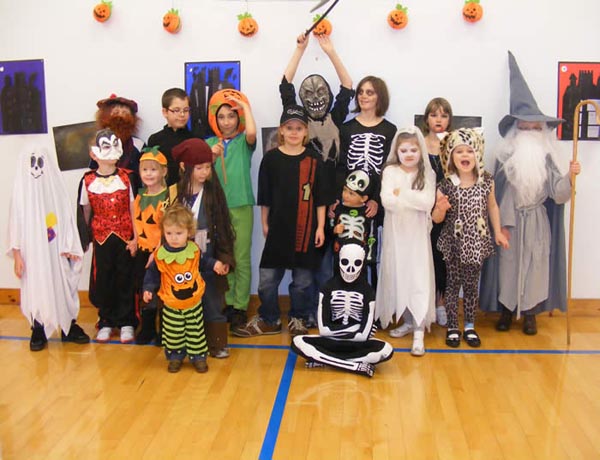 Basically, whoever shows up in the best costume (decided by the host or by vote) wins. The winner can either have the scariest costume around or simply the most gorgeous one. This game can have two winners (a boy and a girl), or just one.

This game can have as many teams as you want with three or four members each. One member will be the monster while the rest will be the team of monster stylists. Teams are given face paint (and/or make up), bits of fabric, wigs, and the like. The goal is to make the scariest looking monster or creature within a span of a few minutes.

This is an individual game. Contestants have to imitate the ghost or monster they’re dressed as. Whoever does the best imitation wins.

If you’re planning to set up a Halloween party for kids, then fun and exciting games are a must. No need to settle for just trick or treat games, here are some of the nice and good kids Halloween games that you may try.

A witchy twist to a favorite classic. This game is basically like the traditional party game “Pin the Tail on the Donkey” but instead of a picture of a donkey, kids have to pin the tail on a black cat. 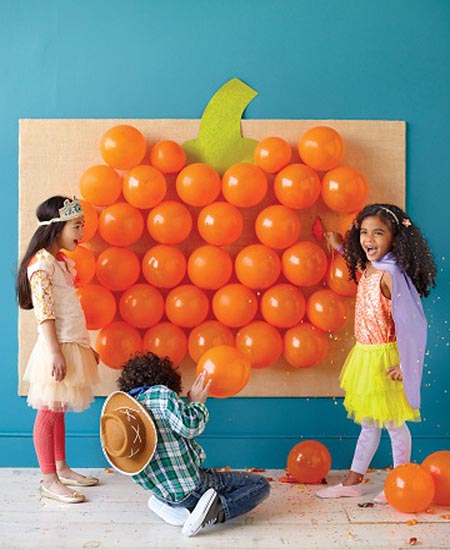 You’ll need balloons and small party favors like rings, candies, or small toys for this game. Put one party treat inside the balloon before you blow it up. Make sure that not all of the balloons have treats. The game involves the kids having to pop a designated number of balloons for a period of time. They have to sit on the balloons in order to pop them. Picking up the balloon is strictly not allowed. Whoever finds the most treats wins. The kids can keep any of the treats they can find. 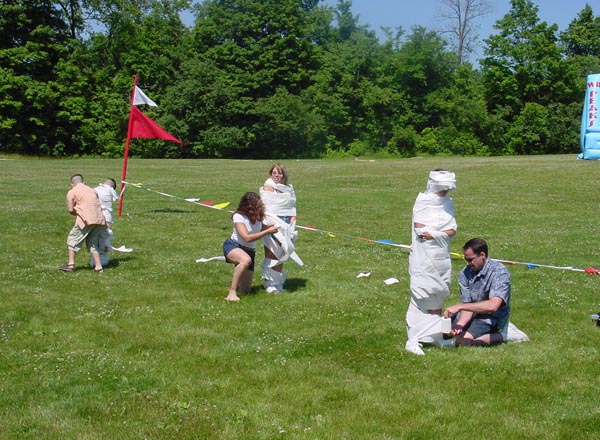 This game is played by partners. One member is the mummy while the other one is responsible for wrapping the bandage around the mummy. Whoever wraps their partner in bandage (from head to toe) the fastest wins.

Toddlers are also welcome to participate in a fun and interesting Halloween games. There are suitable Halloween games for toddlers that you can execute to keep them enjoying the Halloween celebration. Here are some to name a few:

Basically, there are number of doughnuts hanging in the ceiling. The players should then need to eat the doughnut and bite them until gone without the use of their hands. The first one who can finish eating the doughnut wins.

This Halloween game is great for toddlers. A Halloween-themed piñata is used for this game. Adults must supervise this game carefully in case someone gets hurt.

Teenagers may even have a little different ideas when it comes to games for Halloween. Some may even crave for mystery or thrill. But some also want to keep it fun and light. Whether your teens want thrill or fun, here are some teens Halloween party games to try. 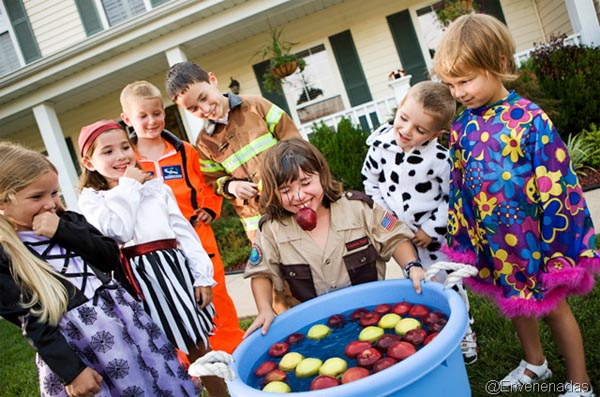 A traditional Halloween game that has been around for centuries. The rules are simple. In a tub filled with water, there are apples floating on the surface. The challenge is to get an apple without using your hands. Guests have to use their teeth only.

A game of hide and seek with a morbid twist! Before the start of the game, the guests have to randomly pick out a slip of paper from a hat. The paper will either have the word “victim” or “killer” written on it. Whoever gets “killer” will be “it”. There can be more than one “it”. Only the host (or a nonparticipating body) knows who the killer is and will provide him or her with either a paintball gun or small balloons filled with paint (preferably red for blood). Everyone must hide on their own and it’s the killer/s job to find everyone and shoot them with paint. Because no one knows who the killer is, the killer can use all sorts of tactics to win this game. Whoever comes out without a drop of paint on them wins. If not, the killer/s wins.

If teens desire for thrill, adults are more on mystery and horror. For an adult Halloween party, you can set up more terrifying games that will make them freak out.

This is a great game to play especially in a large old house. The hosts have to prepare a murder mystery story in advance and hide clues all over the house. There must be a victim and a murderer. During the party, the victim suddenly dies and it’s up to the guests to find out who killed the victim. Whoever uncovers the murderer wins.

Basically a game of charades but focuses mainly on popular horror movies. Teams have to guess the right movie in the shortest amount of time. Whichever team guesses the fastest wins the game.

But for those who are not attending any Halloween parties, but still want to feel the air of horror and mystery, there are Halloween online games that you can play at the comfort of your own home, in front of your personal computer. Here are some of the games online for Halloween that I will suggest.

There are countless zombie online games on the internet. Mostly, these games involve hunting down and killing (again) the zombies. You can find lots of them online.

Again, there are numerous versions you can find easily online. The goal for these games is mainly escaping a haunted house without getting killed by the creatures and ghouls that inhabit it.

If you’re really up for having a real scare this Halloween, you can always download the famous Slender Man game. This game has been described as “traumatic” and “heart-stopping”. Basically, you hunt around the game world looking for the 8 pages before Slender Man finds you. Beware though, the music and graphics will haunt you.

Most girls don’t love the horror and gory Halloween entities much. So, here are some of the light, still fun, Halloween games to try.

Two (or more) teams are needed for this game. Each team will have a small cake to decorate. They have to decorate it with a Halloween theme in mind. Whoever designs the best cake wins.

Teams are given a pile of clothes, bits of fabric, paint, newspapers, and other such materials. They are given a certain amount of time to make their own witch. The team with the best looking witch wins the game.

Make the Halloween even spookier by setting up scary Halloween games, enough to make your guests scream with horror and shock. Here are some to try:

Guests have to watch a scary movie in a dark room. No one is allowed to scream. Whoever screams is out of the game.

Basically, this is a storytelling game. Individuals have to share a scary story (it can be a real experience or a made-up story) and whoever tells the scariest one wins. Bonus if special effects or props are used during the storytelling.

A Halloween party is not complete without drinks. While kids may have juices for drinks, adults opt for alcoholic and sometimes, gory Halloween drinks and punches. Make the drinking even more exciting by using it to Halloween games. 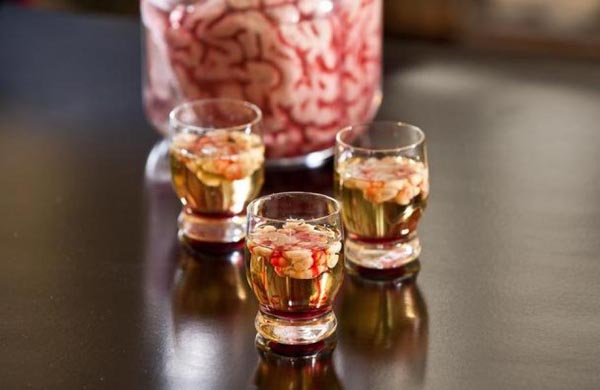 Six non-see through shot cups are used. In three of the cups, pour a “treat” shot. Depending on the host and the players, this can be a non-alcoholic drink like soda or apple cider. The rest of the cups are “trick” shots which are filled with hard liquor. Players have to roll a dice and must drink the cup with the same number as the dice.

You can make your own rules for this game. Basically, players will watch a scary movie (a familiar one works best) and must drink a shot whenever either someone dies or the killer makes an appearance or anything like that. Whoever remains the most sober wins.

Have fun in a Halloween party as a group and everyone should participate. Here are some samples of interactive Halloween games to try. 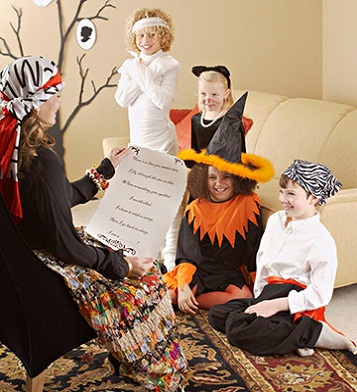 This is an entertaining game to see who can come up with the scariest (or the funniest) ending to a story. The host tells the beginning of a typical scary story but stops midway. Guests are then asked to come up with their own unique ending. The person who tells the best ending wins.