Filipino wedding traditions dates back to the Spanish and American time, and adopted by Filipinos. Some of the customs and traditions adopted from the colonizers and combined with early practices of the natives still performed today, especially the traditions that unite two families. 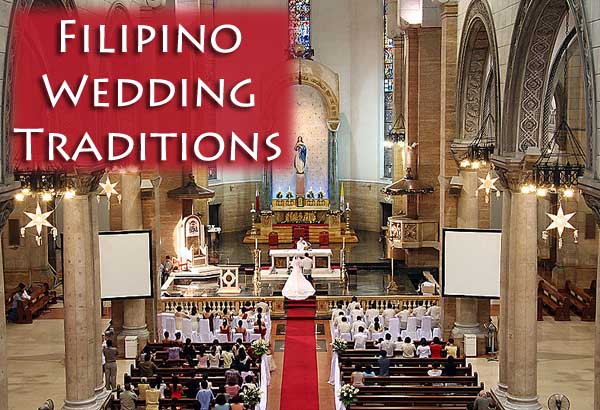 In the Philippines, wedding involves the siblings, elder relatives above all the parents of both parties. Parents play an important role from the wedding preparation to the day of the wedding itself, just like in other countries and I believe, it is because of old age traditions and customs.

Despite the changes in the way Filipinos live and think, the wedding traditions carry out centuries ago, still practices by the city savvy pinoys. Filipinas may not be as shy like they used to in the old days, there maybe no more harana (serenade) and a long courtship (ligawan), but the Filipino people still believe in the custom of pamamanhikan and practices the filipino wedding traditions.

Here are some of the wedding traditions in Philippines still honored and practices by modern Filipinos.

In the Philippines, the groom is expected to seek the approval of the bride’s parents. He must make his intentions loud and clear. His parents must also formally meet with the parents of the bride to discuss the wedding plan. This practice of seeking approval is part of the tradition called pamamanhikan.

Before the colonization, the groom would perform household tasks to gain the approval of the bride’s family. Pananalbihan or servitude in English is a filipino wedding tradition practices by the groom to woo the family of the bride. The man would perform household chores such as fetching water from a nearby lake, chopping woods, washing clothes and other chores to prove their sincerity. Pananalbihan is still pretty much alive in many provinces across the country, and part of their pamamanhikan.

Aside from performing household chores, giving dowry to the bride is also traditional but no longer necessary these days because the wedding expenses often shared by the two families. Today, either the groom’s parents shouldering the cost of the wedding or the couples themselves pay for their wedding expenses. Anyway, Pamamanhikan is a custom established in the pre-colonial time, a tradition that comes from the Filipino Malayan ancestors.

Bachelor’s party and despedida de soltera are traditions adopted from the Americans. However, pre-wedding parties are not necessary so oftentimes there is no farewell party to single life, just an engagement party wherein the couples announce their wedding date and have a formal dinner with close friends and family members. In fact, most of the time it is just the men who have a party. 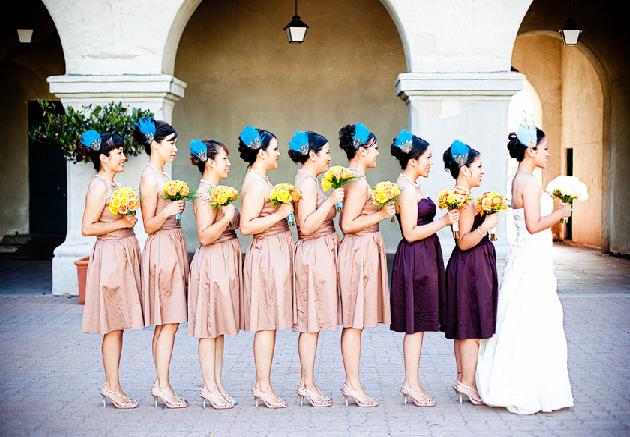 Wedding days are a big occasion, and a time of great rejoicing. In many barrios or small towns, weddings are a big thing, the highlight of gossips and attentions. Many guests attend the wedding feasts even if they are not close to the couple, especially when the reception is done at the bride or groom’s home. And the celebration lasted until the wee hour of the next morning.

Anyway, wedding ceremony in the Philippines is solemn and often done in the church. Although, some Filipinos are becoming bolder with their venue selection the majority still opt for a traditional wedding ceremony, held in the local cathedral. This is no longer surprising being a catholic country, religion plays a big role in the life of Filipinos. 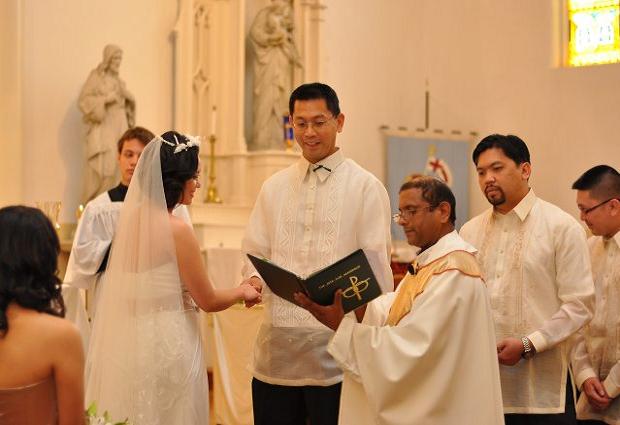 Catholic weddings start with the wedding march, then the nuptial mass and rites wherein the couple declares their love for each other in front of the priest and their guests. They exchange wedding vows, rings and the groom give the arrhae, which symbolizes wealth to his bride for it is the woman entrusted to take care of their home. After the presentation of arrhae, next is the bible and candle lighting, a tradition adopted from Americans.

Then there is the usual placing of veil and cord, wherein the couple kneels side by side and the veil is placed over the head of the bride, a rite done to signify her submission to his future husband. The cord is placed over the couple in a figure eight for togetherness. The cord and veil removed only after the priest blessing.

The last part of the wedding ceremony is the communion, after that the couple is presented to attendees as husband and wife, wherein they kiss to seal the deal. But before that, they also sign a legal contract that binds them legally. After the traditional wedding kiss, the couple leaves the church in which the crowd showered them with rice, confetti, and flower petals.

From the church, everyone heads to the reception venue to party like there is no tomorrow. 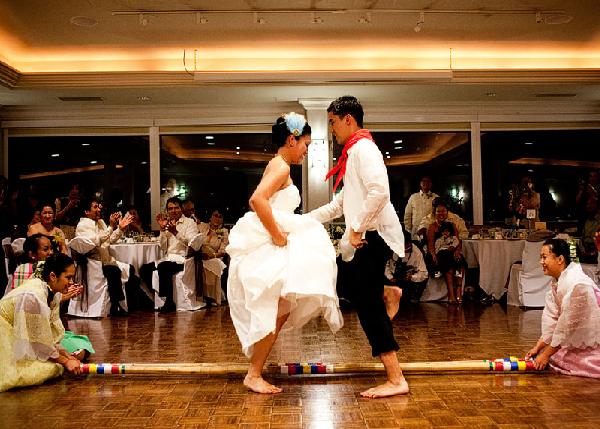 Wedding is a lot more colorful in the Philippines because of Filipino traditions observed from the pamamanhikan to the wedding reception. Yes! There are also filipino traditions followed in the reception. Also, regardless of the time of the wedding, the reception is a lavish affair where arrays of food displayed on the buffet table. In the Philippines, sit down meal usually done in hotels or posh venue only, the typical pinoy celebration is buffet style with a lechon as the centerpiece, more so when the reception held at the home of either the bride or groom’s parents.

At the reception, there are the usual toast from the father of the bride, groom, and best man. There is also the cutting and feeding of the cake, but the cake rarely served, as they are just part of venue décor. Oftentimes, another cake is served to the guests. After the cake rite, there is also the bouquet throwing and the dove released. The doves signify harmony and peace. 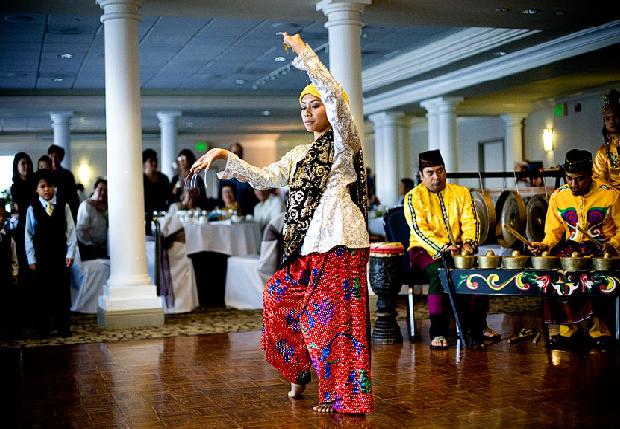 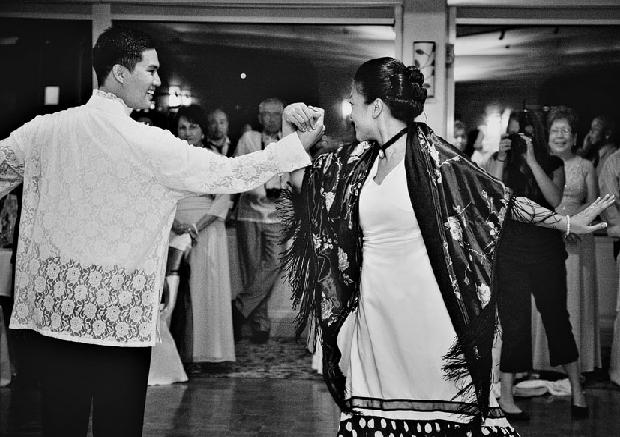 Let us not forget the traditional money dance since it is the fun part of the wedding reception. In the Philippines, it is traditional for guests to pinned cash gifts to the couple clothing while they are dancing at the reception. 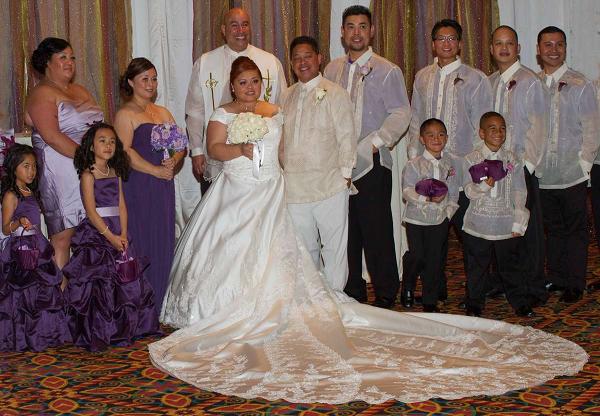 The traditional wedding attire of Filipinos is barong tagalong for the groom and white wedding gown for the bride. The best barong tagalong is “Jusi” made of pineapple fiber, handmade and a bit expensive.

The wedding dress usually made to order and not bought off the rack since trying the wedding gown is a definite no, no. Filipino bride avoids trying wedding gowns for fear of bad luck likewise the groom told not to travel on a long distance before the wedding day since it might also bring ill fortune.

The primary sponsors are men and women whom the couple admire and respect. They are also a close friend of the family or parents. It is typical for Filipino couples to allow their parents to choose the primary sponsors, more than ever in the province. The sponsors who act as the official witnesses also sign in the marriage license.

The secondary sponsors are also important to the wedding. They are not required to provide a generous gift and often times they are a close friend and younger relatives of the couple. Their role is to participate in the ceremony. The secondary sponsors are the ones that place the veil, cord to the couple, and of course light the candles. Traditionally, the sponsors must be male and female, it does not matter if they are married or not.

It is also necessary that the ring bearer is a sibling or relatives of the couple, the little ones of the relatives are given priority for the position of the ring bearer, bible and coin bearer to avoid hurting their feelings. Similar to Mexico, wedding in the Philippines also require an Arrhae, 13 coins given to the bride by the groom. Arrhae symbolizes prosperity and given to the bride by the groom to affirm his commitment to supporting her financial needs.

The other members of the entourage are the maid of honor, usually the sister, cousin or best friend of the bride. There is also the best man, bridesmaid, groomsmen, coin bearer, flower girls, bible bearer and ring bearer to complete the entourage.

Wedding March in the Philippines

Wedding March has not changed much. Although Filipinos as I have said earlier tend to overdo their list of entourage, the wedding march slightly changed to fit the number. The more than the usual number of sponsors and bridesmaids are encouraged too pleased family members of both parties. Like I said, when it comes to the wedding march, the tradition is still pretty much the same for the mother and father of the groom sits on the on the front pew and accompany the groom whose waiting for his bride. The mom, often wait on the front as well, while the father of the bride walks her to the altar to meet his future husband.

Filipino tradition also dictates that the groom pays for all the wedding expenses. Well, this is true in the old days, but not anymore. In a Filipino wedding, before modernity took over, the groom shoulder the clothing expenses of the entourage, wedding ring, food, venue, decorations, everything. Today, as I have said earlier, couples who have enough savings pay for the wedding expenses themselves.

After the wedding feast, there are keepsake given to the guests, and usually the keepsake reflects the wedding theme. The wedding favors often tangible and permanent souvenirs like glass or paperweights.