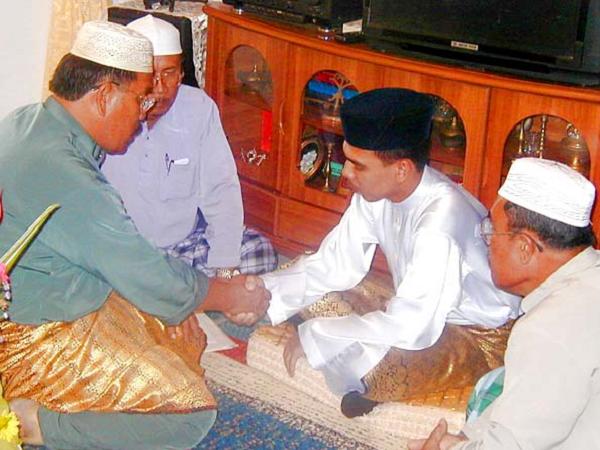 The traditional Islamic marriage is really simple and is without extravagance. There is no Mehndi carnival or singing or dancing in a real Islamic wedding. In a islamic wedding the most important thing is the Nikah ceremony. The Valima event follows it. Both of the events are really simple and serious.
Most of the Muslims spend a lot of money on the wedding decorations, food, dresses and gifts and the wedding itself. But if we look at how Islam considers marriages to be like, then we would be surprised to see that real islam marriage is simple and humble. 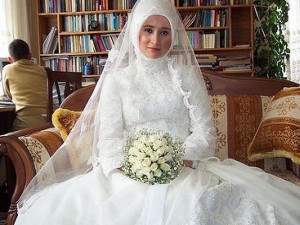 Pre-marriage rituals are conducted separately in the bride and the groom’s house.  Prospective bridge and the groom have limited interaction during these rituals.  Once the boy and the girl give the consent for the marriage, the pre-wedding rituals begin.

Before starting separate rituals in the bridge and the groom’s house, the Maulvi or the religious head seeks permission from the Almighty to perform the wedding. This tradition is known as Ishtikara.  Ishtikara is usually held in the mosque, in presence of the respective fathers of the bride and the groom and other senior members of the family. After reciting, the verses from holy Quran and seeking the permission from Almighty, the Maulvi and the father of the bride and the father of the groom have a consensus on the marriage date. 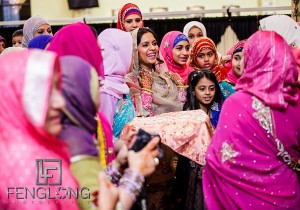 Now starts the bevy of events that are filled with fun and excitement. On a fixed day, Groom mother and senior members from the groom’s family visit the bride and her family. They carry fruits, dates, incense, perfumes and gifts for bride and her family members. Groom’s mother also carries a silver coin or gold coin wrapped in a silken cloth with her. This coin is tied to the bride’s arm and it signifies the marking of the bride as the future daughter-in-law. This ceremony is known as Imam-e-Zamin.  Imam-E-Zamin is similar to the shagun ceremony in the Indian weddings. Few days after Imam-Zamin, the date of Mangni or the engagement is fixed. Traditionally Mangni involves exchange of gifts between the bride and the groom’s family. In the modern day, Muslim bride and the groom may also exchange rings to mark the engagement.

Both the parties make themselves busy in the wedding preparation after the Mangni.  In the days to come, bride is pampered by her friends and relatives. Traditionally, Muslim brides were bathed in essential and aromatic oils to make their skin soft and smooth.  Jasmine extracts are applied to the bride’s hair to add luster and fragrance to her hair. Special food and bride’s favorite dishes are cooked to pamper her. This period also involves the shopping frenzy. The bridal lehenga or the wedding outfit is chosen by the mother in law and is presented to the bride along with jewelry, perfume, dates, and fruits.  Now there pre-marriage rituals are in full force at the bride’s place. 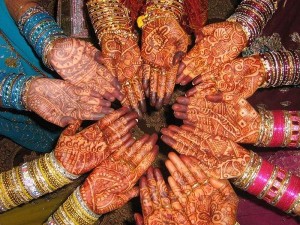 Mehndi ceremony is organized two to three days prior to the wedding night. Mehndi ceremony is one of the most exciting ceremonies in the Muslim Wedding. During this ceremony, the family members of the bride revel in music, song and dance.  A paste of fresh turmeric is applied on bride’s skin by her family, relatives and friends. This is done, in order to bring in natural glow to her face. Beautiful Arabic Mehndi designs are drawn on bride’s hands and feet. The first dot of henna is applied by the bride’s mother on bride’s palm.  Family members also have Arabic Mehndi designs or intricate Mehndi designs drawn on their hand. This ceremony is dominated by women. Bride is fed by her mother with her own hands.  Cousins of the bride might engage in fun and frolic and resort to teasing the bride about the groom.  Mehndi ki Raat is much awaited ceremony in Muslim weddings.  Many traditional Muslim families believe that the darker the shade of henna on the bride’s hand, happier is her married life.  Muslim brides do not step out of their house after the Mehndi ceremony until the day of their wedding. 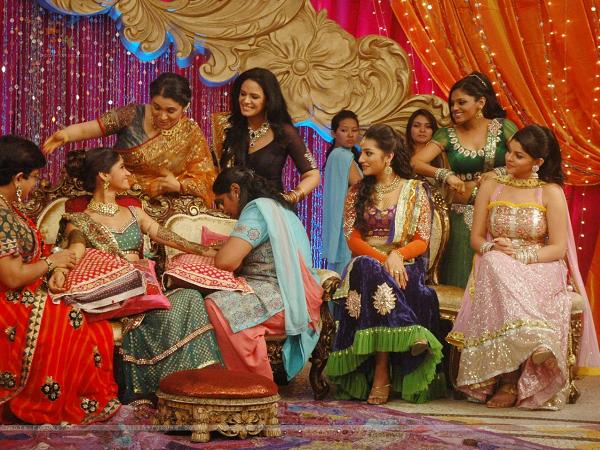 Mahr or Baraat: This ritual takes place on the wedding day, the groom arrives at the bride’s house or the wedding venue with the Baraat. Baraat refers to the marriage procession that includes friends, relatives, musicians etc.  On reaching, the wedding venue, the groom shares a sherbet (sweet drink similar to juice) with the bride’s brother or her relatives. Bride’s sisters and cousins resort to slapping the groom and his friends playfully with a bouquet of flowers. Groom is then welcomed by the bride’s parents. 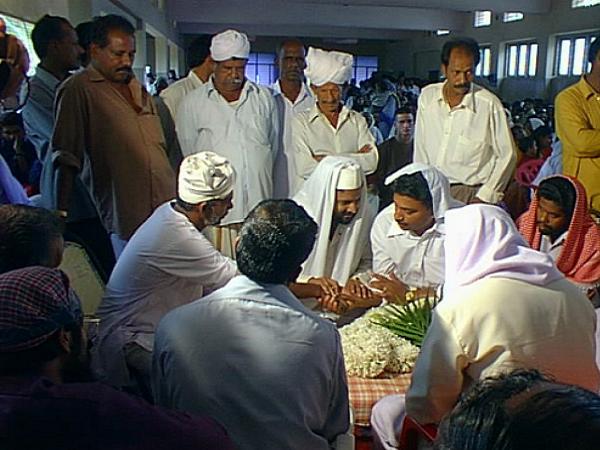 Muslim wedding is presided by the Maulvi or The Qazi. The bride and the groom are seated separately. Maulvi or the head priest reads the verses for Holy Quran. The bride’s father or the Walis then offers the bride in marriage to the groom. The groom then proposes to the bride. Maulvi conveys the proposal to the bride. The ritual of processing is called Ijaab. The bride then has to convey her acceptance by saying ‘Qubool’. Ijaab and Qubool forge the ceremony.  After the Ijaab and Qubool ceremony, starts the ceremony of Meher. Meher is the endowment offered by the groom’s family to bride.  The Meher cannot be less than 10 dirham.  Meher is usually in form of cash, gold and property. Bride and the groom then sign the Nikahnaama.  Fathers of the bride and groom also sign the Nikahnaama along with the Maulvi. Nikahnaama signifies the formal evidence of the wedding ceremony. 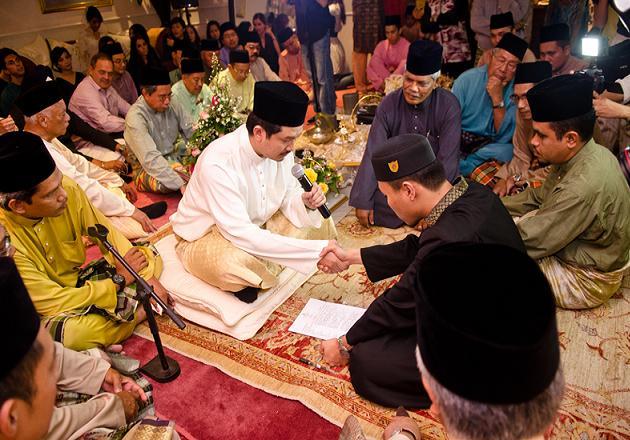 Once the marriage is solemnized, bride and the groom are bought together and seated on the stage.  The couple first visits the women guests. In Muslim weddings, men and women are seated separately. The groom gives gifts to the bride’s sisters and relatives.  Bride also receives gifts in form of jewelry, silk and silver coins.  After paying visit to elders from both the families, the couple returns to its sitting place. Throughout the ceremony, the head of the bride and the groom are covered with a dupatta. The couple then recites prayers under the guidance of the Qazi. A copy of holy Quran is placed between the couple when they are seated among the common guests. The bride and the groom cannot view each other directly. 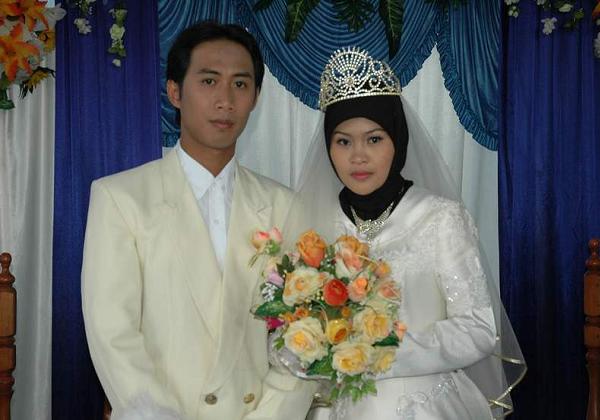 Ruksat: After the Nikaah is solemnized, bride is bid farewell by her teary eyed relatives. This ceremony is called the Ruksat.  During the Ruksat, the bride’s father places his daughter’s hand in the hand of the groom and tells him to be her protector and her guide. Groom’s mother welcomes the bride in their new house. A copy of Holy Quran is held over the bride’s head during the welcoming ceremony. Bride seeks blessings from the elders in the groom’s family. The bride visits her home on the fourth day of her wedding. She receives a warm welcome from her family and relatives.

Walima: Groom’s family hosts a wedding reception at a chosen venue on the fifth day of the wedding ceremony. This reception is formally known as Daawat-e-Walima. Both the families, relatives and friends join the Daawat-e-Walima; they celebrate the unison of the couple, and wish them a happy married life. 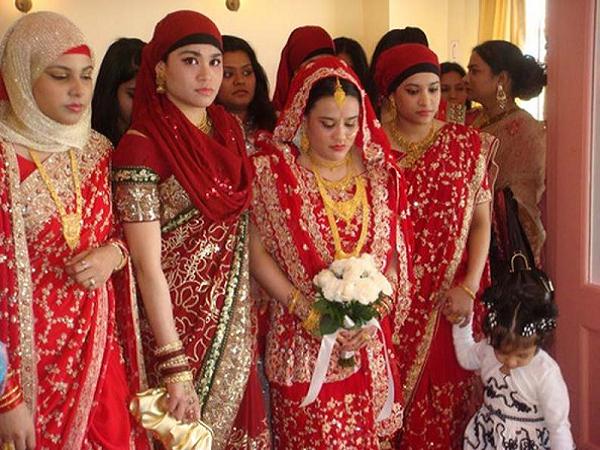 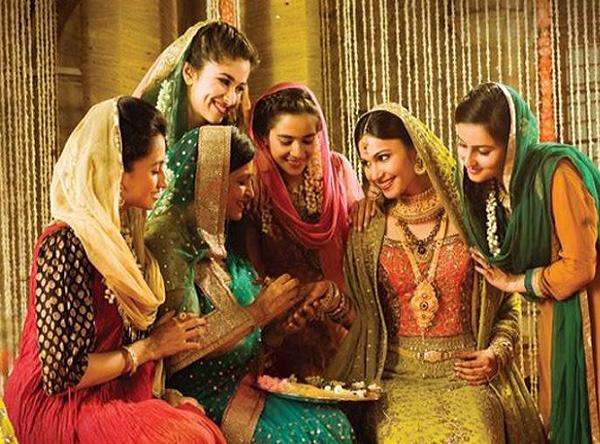 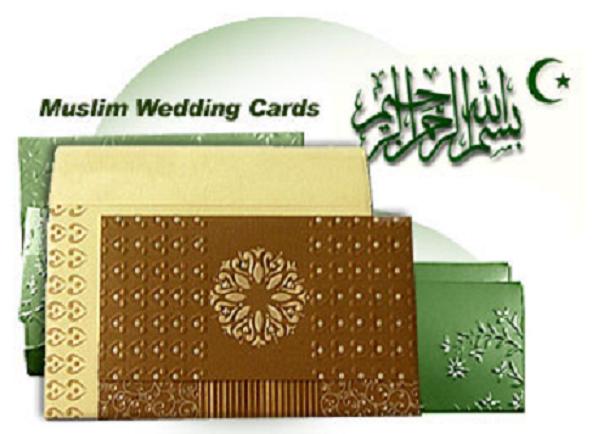 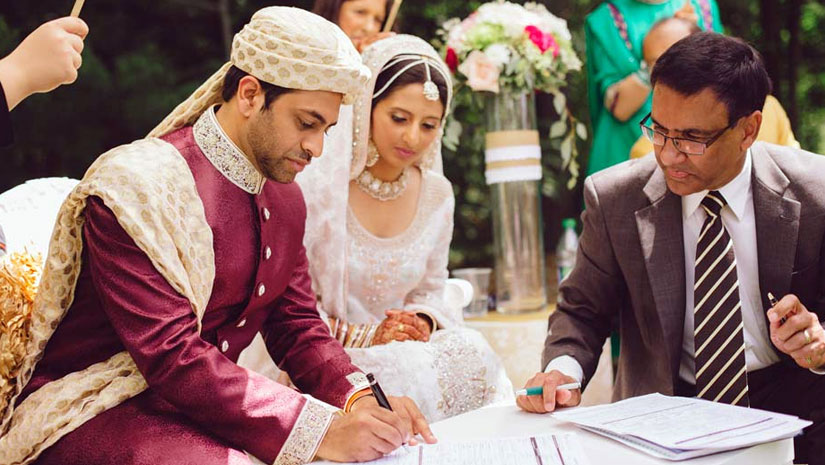