Mehndi is a temporary tattoo which is applied by women on their body for making them beautiful. Mehndi makes the hands very prominent so that they are visible from a distance and attract attention. So make sure of one thing when you apply mehndi; the design should be good. No one wants to attract because of an ugly characteristic so the patterns you get should be lovely.

Do not be worried because a good thing does not necessarily have to be difficult. There are so many designs which are easy to put on but look great when you are done. Especially for amateurs it is better to start with the easy designs and continue with them until they have mastered them. Never ever be cocky because this is an art which does not have guarantees.

Kids love mehndi but do not know how to handle it; they are very eager to get the henna on their hands but after that they just forget it and play with the wet mehndi on their hands, ruining not only their own clothes and hands but also their surroundings. So, whatever you do be sure to make them sit in one place by offering them candy or something. 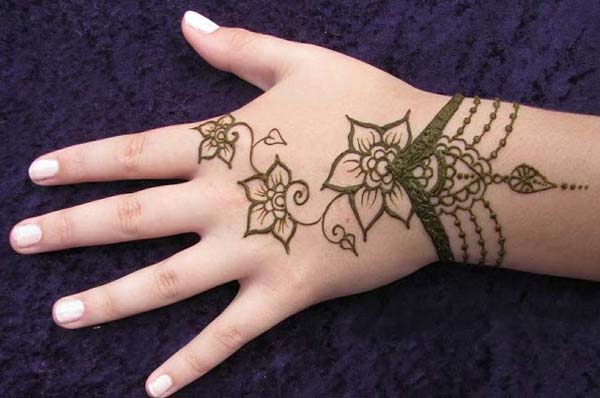 The best thing about children’s mehndi is that it is very simple and plain. A child is innocent and young in the years and putting heavy mehndi on their hands would not suit their character. The pattern can be intricate but not very full. As girls living and growing up in Pakistan, India or Arab, a lot of girls want to learn the art of applying mehndi and many even succeed in becoming excellent at their job. You cannot learn to practice it in a jiffy, you have to be patient and determined and not lose hope. Whenever start to do something difficult, the initial phase goes easily but after some time we get frustrated because of the lack of success but you should not give up when this happens you have to be strong and motivate yourself. There are plenty of designs available for the practice of beginners; the main things you need is a mehndi cone and a willing subject, and you are all set to go on this adventure.

People from UAE and Saudi Arabia also love the art of mehndi and they have introduced many new features to this art by introducing new designs. The Arabic designs are stunning; no matter how much you praise it, it would still be less. They are beautiful but not all are difficult; some are very easy but intricate and can be done perfectly by amateurs after a little bit of practice. They are quite popular among brides especially but even generally girls love it; the intricacy and delicacy of the lines, the symbols and the patterns of betel leaves and flowers are only a few of the things that have made it loved by a vast number of women. Feet are a little more difficult than hands because of their shape and their size. Most mehndi practitioners are asked to put mehndi on hands and seldom are they told to do feet mehndi. For this, you need to remember that woken want neat feet so even if the mehndi is not that great make sure that it is neat. Feet mehndi is a shade complex but when you are done with it you will love it. The internet is a beautiful place where you can find everything from ages past to the present news; you can find plenty of easy designs for feet designs in just a few minutes so do not worry and practice away! Eids are occasions when every action is rushed, when you have to he quick to get the work done and when every shop is full to its capacity. So is the case with beauty parlors where women go for hair cutting, facial and other stuff on the last day. Similarly, the mehndi practitioners are in high demand so much that a long line waits for one expert to be free. In Pakistan, women stand in queues waiting for their turn; at such times, you have to be quick and fast; you cannot spend too much time on one woman’s mehndi design and this is where the simple designs come in. You can apply the simple ones instead of the complex ones if you want the work done in time. Weddings are events when everyone is happy; in Pakistani weddings the bride usually wears red and she wears very complex and heavy designs which will not look appropriate on her if she was not the bride. But the bride’s sisters and cousins get mehndi done which is simple and easy. Contrary to popular opinion these days, girls like mehndis that are simple and not much heavy because they want to appear younger than their years. At weddings of their closed ones girls and women tend to go for simple and plain rather than heavy and full which is a great benefit for beginner mehndi practitioners.

Mehndi has stolen the heart of young girls since ages past; young girls from all over the world apply it. For girls who are new to the practice easy designs are best for practicing. Never start applying on an adult girl without practicing thoroughly first, even if it is an easy design.

Always use a drawing book on which you practice the same design repeatedly if you want to become a pro. Be sure that you can do it before applying on a client. Clients pay money so they do not want it to go to waste by the hands of inexperienced people.

Usually on weddings, women go for mehndi on the legs. The bride obviously gets the very heavy kind of designs done but others go for simple and plain designs.

So when you go to a bride’s house for the mehndi you get so tired that you do not have much time or energy left for more to do such designs and hence you have to go for the easy way and do the simple designs. All arts are difficult and you should start with simple things then move to difficult steps.

Okay so whenever you want to learn how to practice mehndi there are very few who would volunteer to sacrifice their hands at the inexperienced hands of a beginner. This is when your left hand comes in handy; most of the humans are lefty so you can use your right hand to apply on the left hand.

It might be a little uncomfortable and difficult but you will get used to it and besides it will helps you to become better at the art. And it would be better to use easy designs like the circular ones to get a steady hand and become an expert.