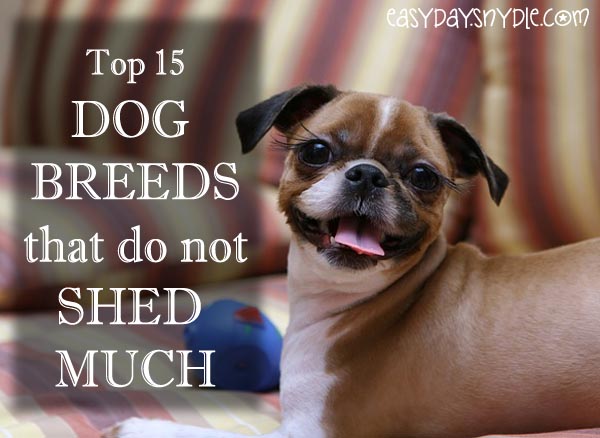 Taking care of dogs can be problematic for people who are prone to allergic reactions. Animals in general are known to be producers of allergens. These allergens can be found in the saliva, urine, pet dander, or mucous. However, it is said to be caused mainly by the hair, coat, or fur.

Dog lovers who are allergy sufferers should not be discouraged from owning one. It is just a matter of choosing the right type of dog to pet. Certain breeds of dogs are considered hypoallergenic. This means they shed less fur, or do not shed at all. Some are even said to have the same pH as human hair.
These non-shedding dog breeds may be for certain people with particular health needs but anyone may consider them for mere convenience. Naturally, there will be less mess to deal with and less time for grooming.

Here are some of the best non-shedding breeds of dogs to consider.

This Italian dog belongs to the toy group. They have a long, fluffy coat but do not shed easily. In fact, they need a firm bristle brush in grooming. They also only require monthly shampooing or bathing. These dogs are playful and enjoy both the apartment and garden life. They tend to unedrgo separation anxieties which makes them an excellent and loyal companion.

Cockapoos are one of the designer dog hybrids. They are a product of two breeds: the cocker spaniel and the poodle. They are well known for being low-allergen and low-shedding. Naturally intelligent and curious, Cockapoos also have a longer life span than other dog breeds. Some reach 15 years over.

This small breed of dogs originally from Cuba is famous among celebrities. The paramount reason of buying them is the fact that they almost do not shed 100%. This is true even if they need regular brushing. Their double coat traps that dander they release, and protect them from the heat of the sun.

The lovely Bichon Frise is a lap dog historically famous among the French nobility. Bichons, as they are fondly nicknamed, normally have long hair which is curled loosely. And just like human hair, they never stop growing. Despite this, they are known to have a fantastic ability to not shed.

There are three types of this breed: The giant, the standard, and the miniature schnauzer. However, there is a common thing among them – Schnauzers are hypoallergenic dogs because they do not shed dander. They have adorable physical features and pleasant personalities. They love attention and value sense of belonging.

Italian Greyhounds belong to the toy group of dogs. They were favorites of European Royalties and were often found roaming royal courts and castles. As such, it has an elegant way of strutting and moves in a distinguished gait. The IG, as these dogs are often called, chases everything that moves. In the process, they shed minimally.

This fancy breed of dogs is very cute and cuddly. However, they are aggressive and fearless. They cannot tolerate children with ease and is said to be unreceptive to other humans and other animals. Maltese Terriers have great hindquarter muscles which make them exceptional jumpers. They do not have an undercoat that makes them have little to no shedding at all.

Poodles are often regarded as fashion dogs. They are often styled sleek and dressed to the occasion. As such, it will not be surprising to know that it was made the French national dog. On the other side however, Poodles are very intelligent and athletic. Considering they have a rather iconic fur, Poodles really are not shedders so they do not give dog allergies. Moreover, they are actually odorless.

This breed is often called the “hairy hairless.” They only grown hair on certain parts of their body like the head, tail, and in some instances, around the legs. Chinese Crested dogs are show stoppers. They are beautiful but not proud. They are said to stir no hostile tendencies with the presence of other family dogs. The fact that they are almost hairless makes them hypoallergenic.

The Irish Water Spaniel relates to its name because it loves basking and hunting around bodies of water. It has a very active outdoors lifestyle. It is relatively quiet so when it barks, it warns. Its curly brown hair makes it look like a brown poodle but it is not. It has a very dense coat which requires regular grooming – around two to three times a week. Despite this, it still sheds hair minimally.

Labradoodles are one of the cutest breeds of dogs. They are like living stuffed toys that come in many colors. Their sense of affection makes them a great therapy dog. Labradoodles are trained on stage. They are breeds of actor dogs. And they can swim. They may be active in many fields but they keep their fur intact. Labradoodles will not give an allergy sufferer a hard time taking care of them.

This lively breed is popular for having a long, dark blue hair. However, they must love their own hair because they do not shed it off massively like other dogs do. These energetic dogs have the tendency to get over excited and restless. A perfect companion during winter, they are an efficient warmer when cradled on the lap. Despite the bouncy, jovial disposition Australian Silky Terriers can be fierce. It is important to train them to know who is in charge.

Border Terriers were bred to hunt small targets such as rodents. Because they are relatively small, they can squeeze and flatten themselves to fit underground for this purpose. They are very creative and intelligent. Despite their stature, they can bark quite loudly and often do so. Because they are natural hunters, they get pretty excited with just about anything that moves. They may be very outdoorsy and active, but shedding follicles should not be their owner’s problem.

Known as “holy dogs of Tibet” for being raised in Buddhist monasteries over 2,000 years ago, it is not surprising for these dogs to be gentle, dedicated, and sensitive to its owner’s moods. They have long been revered as good luck charms. As excellent companion dogs, they are said to tend to feel very sad and lonely when left alone too long. Their shaggy exterior actually has two coats – an inner coat which is short and smooth, and an outer one which is long and straight. They will not give their owners a hard time because they barely shed hair and is therefore one of the hypoallergenic breeds of dogs.

Shih Tzus are one of the most popular breeds of dogs. “Shih Tzu” literally means “Tibetan Lion Dog.” Having a strong Asian descent, they are also often compared to the chrysanthemum flower. This is because they grow their hair from the center of the face outwards. These fluffy bundles can grow endless hair so trimming can come in handy. This is especially so that they are very vulnerable to both heat and cold. Anyone can own a Shih Tzu. They do not tend to foliate or shed their hair.