Are you wondering about how to make gravy for turkey? Homemade turkey gravy, using pan drippings, turkey giblet stock and meat juices from a perfectly roasted turkey is easy, you do not even have to be a genius to make the best thanksgiving gravy. This coming thanksgiving, 95% of American household will be cooking turkey, but dinner is incomplete without gravy. That’s why, in this post you will learn the secret to a great tasting gravy.

How to Make Turkey Gravy

Homemade turkey gravy is easy to make, so you should not concerned yourself with anything other than what to use as the based for your turkey gravy. You see there are several ways to create the best thanksgiving gravy, and one very easy way is to use a turkey giblet.

What are giblets? Well, those are extra parts of the bird like gizzard, liver, and heart that you don’t roast but cook separately for gravy. By the way, always remember to remove the giblets, even if you are not making turkey giblet gravy. And when buying a raw turkey, keep in mind that most of the time the butcher sealed the giblets in a bag then they placed it inside the turkey cavity. So, do not be surprised in case you find a bag of extra parts once you are cleaning your bird. Additionally, don’t throw the plastic or paper bag, those extra parts can make mean turkey gravy. 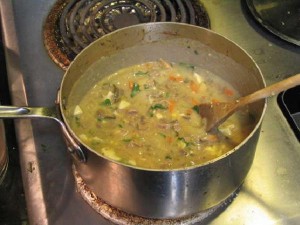 1. Rinse the giblets, and put the liver in an airtight container for later use, if you are using it for your giblet gravy. Do the same with the other giblets part such as neck bones, wing tips, etc.
2. Boil the giblets (neck, wing tips, etc, except liver) in a large pot a day before you are about to cook the turkey or anytime you want. In case you decide to make stock a day before, just put in the fridge the stocks.
3. When cooking the giblets, put into the pot, cover with 4 cups of water, and then let it boil over high heat. Add chopped carrot, chopped stalks of celery, parsley, and onions with peel, to give your broth a golden color.
4. Bring it to a boil, then reduce heat and just simmer for 1 ½ hours or just until the giblets are tender. You may add your liver (finely chopped) if you are using it at this time, and then simmer for 10 minutes more.
5. Remove the pot from the heat and strain the broth with a strainer. Discard the vegetables and store in a clean container your giblet broth for later use. You can also discard the giblets or pick the meat from the wing tips, and neck, then chopped finely the meat including all giblets. Add these to the turkey stock when you are finally making the gravy.
Note: Once your turkey already roasted, remove from the roasting pan. Transfer to a clean cutting board, and let it rest for half an hour, to collect juices and to allow some of the juices to get re-absorbed. While your turkey is in a state of resting, make your gravy.
6. Get the roasting pan, with the fat and drippings of the turkey still in it. Place the pan on your stovetop, turn on the heat to medium heat (yes, make the gravy on the same pan you use for roasting turkey). Skim and just discard the excess fat, if there is any from the roasting pan. (If you don’t have any idea how much fat to use on your gravy, check your turkey gravy ingredients).
Note: To remove the fat easily pour the turkey juices on a bowl or tall measuring cup. The fat will naturally float to the top of the cup or bowl, skim off all the fat except the 3-4 tablespoon of fat for the gravy, and then just return the juices to the roasting pan, minus the excess fat.
7. Scrape the sides and bottom of the roasting pan using a heavy spoon to get the crunchy bits and dark drippings then leave them. These bits and drippings will enhance the gravy and make it rich in flavor and taste.
8. Add your prepared giblet stock to the roasting pan for additional flavor. The amount of stocks depends on your turkey gravy ingredients.

In case your first attempt of making turkey gravy is an epic fail, do not be dishearten. There are ways to fix your gravy, below are some of the gravy troubleshooting tips you need to keep in mind, for emergency:
Greasy Gravy – If you have put too much fat on your gravy while cooking then you will end up with greasy gravy. To solve the problem, use a fat separator then skim off the excess fat with a wide bowled spoon.
Doughy Gravy – If your gravy ends up a bit chalky or doughy, just add more stock or water to thin it then turn the heat up to rapidly simmer the gravy.
Note: Your turkey gravy will become doughy or taste floury when you used a lot of flour and did not cook the flour long enough. You see, you should whisk the flour constantly, once you added it to the butter or pan drippings until it smells nutty and turns golden brown.
Lumpy Gravy – If the gravy has lumps, don’t panic, just strain before serving using a fine sieve then discard the solids. Another way to solve the problem, place the gravy in a blender or food processor, and just process until there is no lump. Processing the lumpy gravy is the easiest way to remedy the problem.
Thin Gravy – Thin gravy is a no, no for thanksgiving dinner. To fix the problem, simmer the gravy over medium high heat to reduce the liquid more. You probably put too much stock and did not cook your gravy long enough to thicken the gravy.
Note: You can also add cornstarch paste or flour paste to the gravy to thicken it. When adding the paste, gradually pour and stir constantly, while bringing the gravy to a boil. Let it cook until the flour flavors dissipate.
Thick Gravy – To remedy thick turkey gravy just gradually whisk in more stock into the pan until the desired consistency has been achieved.
Tasteless Gravy – Bland gravy is easy to solve just add more seasoning as necessary like freshly ground pepper and salt.
Note: Using canned stock might make the gravy tasteless, so it is best to use homemade stock. But if you want a more superior gravy, try using chicken instead of a turkey for your homemade stock.
Salty Gravy – If you have put too much salt on your gravy, then you will definitely end up with salty gravy. To repair the problem, make another set of gravy but this time; do not add any salt at all. Mixed the two batches together, to get the desired taste then serve.
Note: You only prepare another batch when over salting is severe. And since you don’t have any more drippings, use flour and water for thickener and prepare your gravy using butter.
Light Colored Gravy – Color is important in gravy, so if your gravy lightly colored, fix the problem. To take care of the problem, make a dark roux. It is a thickener made from flour and fat. To make the roux, just heat the fat, add the flour, and let it cook over medium heat. Stir constantly, just until the roux is deep brown in color. If adding roux fail in making the gravy brown, add 1/8 tsp of instant coffee then stir to blend, this is the easy and quick way to remedy the problem.

How to Make Gravy for Turkey

Below are ingredients to make great tasting thanksgiving gravy for your turkey, save it for later use.
Preparation Time: 20 minutes
Cooking Time: 10 minutes
Yields: Many

1. After roasting the turkey, removed it from the oven and just set aside to rest. Place the roasting pan over a burner on the stovetop, turn up the heat over medium heat.
2. Before you cook the gravy, heat the juices or liquid you will use until boiling point then turn down the heat to low to keep the liquid warm.
3. Make a roux or slurry, so you do not whisk any more lumps from the gravy mixture.
4. In a clean container with lid, put the flour and about 2 cups of water. Add the prepared flour mixture or thickened slurry to the pan juices you have reserved. This method will prevent lumps from setting when making the gravy.
Note: Make extra flour and water mixture, in case you need more.
5. As soon as the drippings, fat and liquid are lightly bubbling in the roasting pan, slowly add the slurry mixture or flour mixture to the gravy pan, stir constantly. Once the mixture starts thickening, stop adding the flour mixture.
Note: The amount of the flour mixture you will use for the gravy depends on how much drippings you have in the pan. In case, a lump still develop, use a wire whisk to get the lump remove.
6. Once your flour mixtures whisked-in and the gravy seem a bit thick, add more water but do it a little at a time, until the gravy develop to the desired consistency.
Note: If other gravy problem develops, like the ones discuss earlier, use the troubleshooting guide to fix the gravy.
7. Cook the gravy, let it simmer gently for at least 10 minutes or until the flour cooked thoroughly as, undercooked flour will give your gravy a floury taste.
8. Season the gravy with pepper and salt to taste, you may add other seasonings you want on top of what I have mentioned.
9. Serve the gravy in a warmed gravy boat, sauce boat or pitcher (wide-mouthed) or whatever you use for serving your turkey gravy.

Gravy has a tendency to thicken once you removed it from the heat, but not doing so will burn the gravy. So, do not be surprised, in case you discover your gravy is thickening. The reminder is for a first timer, those who have just prepared their first turkey and turkey gravy for thanksgiving, Christmas, and other occasions. Yup! You read it right, turkeys are not just for thanksgiving as you can prepare America’s favorite bird anytime and anyway you want.
Anyway, back to the reminder, if you have prepared a large amount of gravy, a glass beer pitchers also make a good serving, you save yourself from the trouble of constantly refilling the gravy boat as beer pitchers can hold more gravy. Also, don’t forget to put a plate under your serving container, the plate will catch any drips.
To determine the right amount of flour to use for the gravy, a thumb of the rule is for 2 cups of gravy, you must use 3 tbsp of flour, 3 tbsp of fat and about 2-3 cups of liquid. But of course, if you want a thicker gravy just add more or less, for thin gravy.
If you have reserved or have remaining juices from your turkey, you may use it for potato or vegetable juice. The potato juice comes from boiling potatoes. Bear in mind, you can make any type of liquid for making thanksgiving turkey, but it is always best to use drippings from your roasting pan and the turkey stock for making your gravy. One more thing, in case there is not enough fat from your turkey, you can also use butter as substitute.
So, here’s my thanksgiving gravy recipe and everything you need to know about making turkey gravy for thanksgiving dinner and other occasions. The troubleshooting tips I have discussed earlier should prevent a gravy disaster on an important occasion. Thank you for reading and I hope you have learned a thing or two from this article. Have a nice time preparing and cooking thanksgiving gravy this thanksgiving day. Enjoy!